A couple of sessions locally in the fine weather.

Hi all,
I was lucky enough to get a couple of days to myself in a scenic bay in Inishowen.
The first day I woke to blazing and calm inshore, it looked lovely out there. 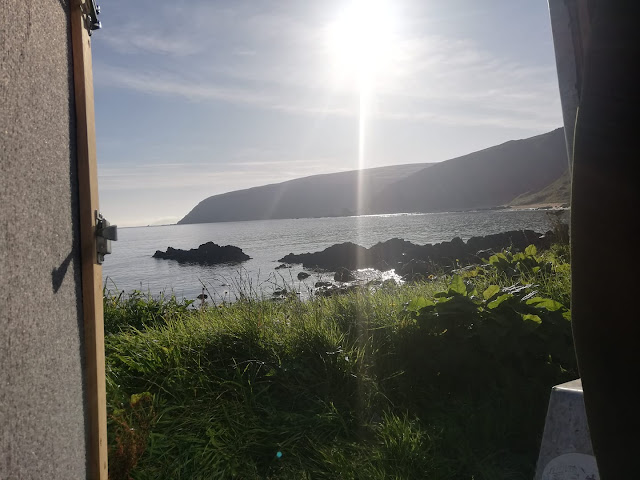 That was the view from my bed.

Soon after I was afloat and paddling across the bay trolling a small fiish lure copy and a micro plug.
I wasn't halfway across the bay when the fiish lure took a screamer of a hit with line pouring off the reel at such a rate the I had trouble getting it out of the rod holder.
Whe I finally did the fish went a few more yards and burried into the kelp. I held fast and pumped the fish hard and until unfortunately the 18lb fluro carbon leader broke.
I was gutted, had to be a good bass or a savage wrasse. The spot was no more then ten feet deep and Its rare to hit pollock over 3lb in that section of the bay. Though I'll never know now.

I trolled on and had a half dozen pollock to 2lb and then headed across the bay out to open water which was over a mile the tide was running quite strong and the was a decent swell running, so it was back in to mess around with the wrasse and pollock.

The fishing was slow on the ebb tide and I was having no luck with the better pollock and began trying for wrasse on the black coloured z-man lures.
The bigger pollock soon switched on to that and hit it every time. I just gave it a few bumps along the bottom and a slow lift off the bottom and BANG, they would smash it. Great sport and a great laugh on the light gear.
I didn't hit and wrasse on the lure but had a few small but well-marked fish on lugworm 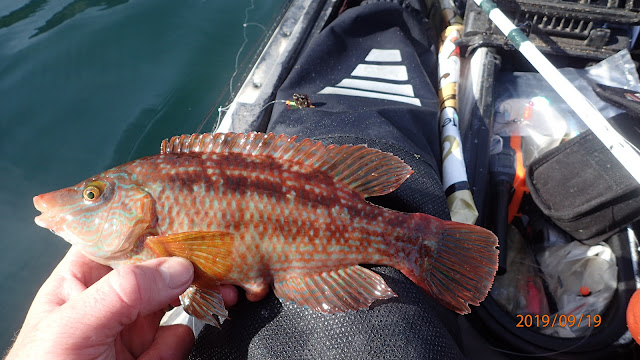 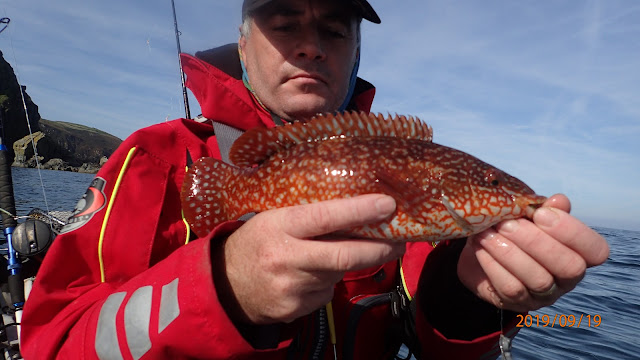 Great colours in them at this time of year. 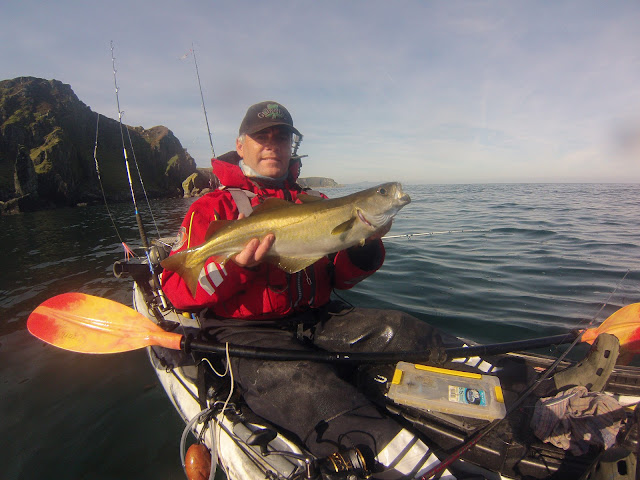 Some reasonable pollock gave a great fight,
After a while, I decided to give the sand a try as the tide was now flooding and I was hoping for a plaice, ray or if I was very lucky a turbot.
I had lugworm on a three-down flowing trace and a jighead with a strip of fresh mackerel. Well I may as well just threw the bait over the side as it was devoured in seconds by hoards of pin whiting.
So I persevered with the three-down rig with worm baits and I put on the one bait pin whiting wouldn't eat, small whiting.
I managed a few dabs mids the constant rebaiting and a short while later there was some drag on the light rod with a jighead. I reeled it up only find a little beauty of a small turbot, I was delighted. 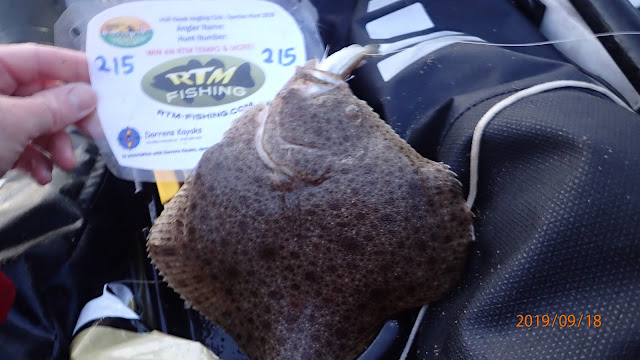 A quick picture and away it went like a little flying saucer under the water, Very funny fish to see swimming off.

The day was getting on and I wanted to try the shore along the inner bay as it got dark and I wanted to use the white feed shallow but didn't fancy losing such an expensive lure in the weed.
So I trolled a silver and gold savage gear seeker lure and a strip from a large squid since it's also white and I hoped it would get a good response as the feed shallow can. 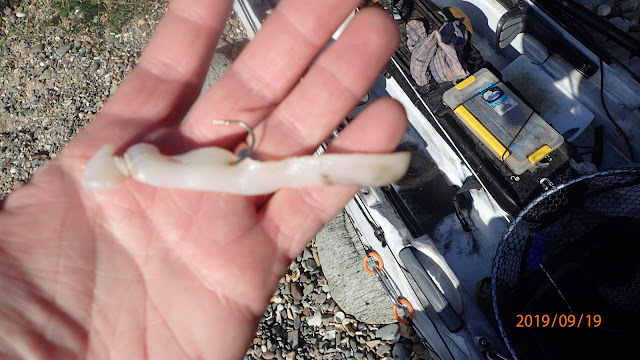 That's similar to what I used.
Well as soon as I started to troll it was pollock after pollock on the squid strip, they smashed it every few yards while the seeker lure didn't get one hit. I had about 15 pollock again to a max of 2lb, though it was great craic.

DAY TWO.
The next day was almost a carbon copy of the previous day, lovely weather and the main lure that worked was the z-man and after that, it was all mackerel strips and squid that done the damage.
The only difference was the dolphins, at first there was about ten going by, then thirty minutes later a pod of at least fifty young and old, some were very small swimming tight to their mothers. 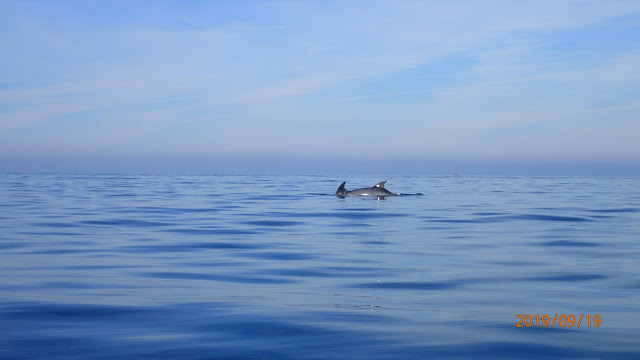 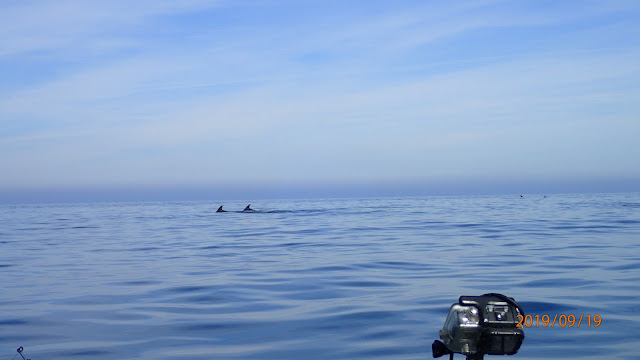 Again I came in along the shore this time a few hours earlier as I was after garfish and as I haven't seen any sign of them this year a strong effort had to be made.
In I went, one rod out with a size 1/0 hook and a 4inch long thin strip of mackerel trolled behind me very very slowly and as I went, the rod got a tap so light you'd think it was a tiny pollock.
I saw that tap and just stopped dead, take the rod out of the rod holder, point the rod at the fish and as it takes up the slack and "FISH ON".
I was delighted, a few minutes trolling and I had one.
I carried on and had another seven in just over an hour.
Heres a photo of the best one. 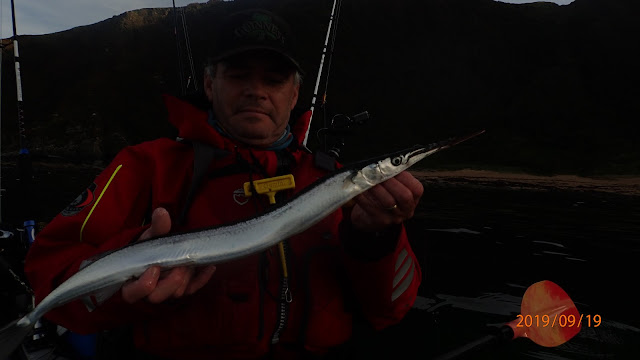 Two very enjoyable days away, though no spectacular fish the ones I had I was very pleased with.
Although I have my eye on a spot for bigger turbot but the winter weather may creep in before I get a chance to hit them.

Well, thanks for reading and paddle safe out there.

Posted by Graham Smith at 13:56 No comments:

Some of my very kind sponsors and friends